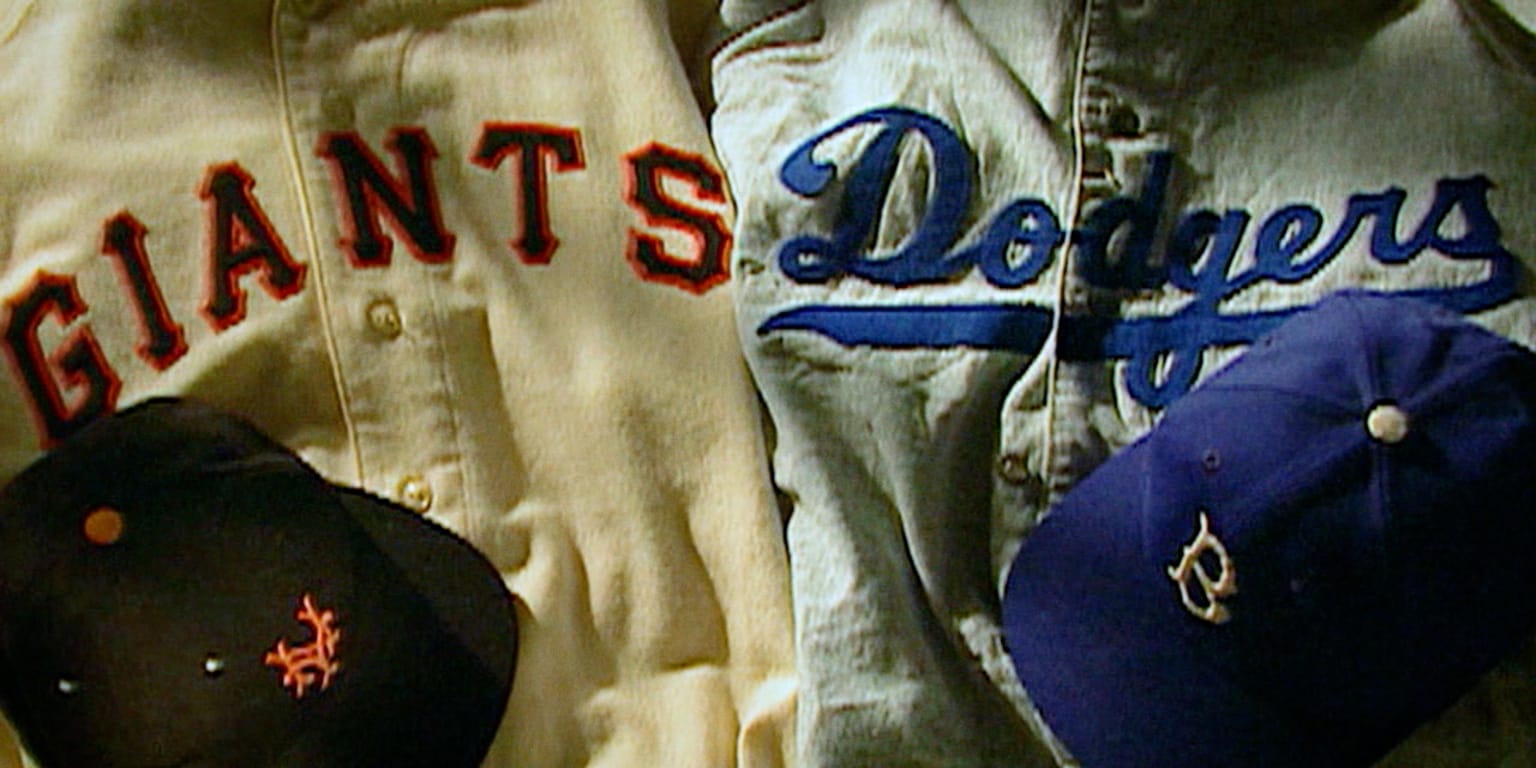 A win-or-go-home game against your biggest rival, with the whole baseball world watching? It doesn’t get any better than that, as we just saw when the Yankees and Red Sox staged an electric American League Wild Card Game at Fenway Park. Now, we get to enjoy that treat again when the Dodgers visit the Giants for Thursday’s decisive NLDS Game 5 at Oracle Park. Each team enters with 109 total wins across the regular season and postseason, raising the stakes even further.

The Dodgers-Giants rivalry dates back to the late 1800s but, believe it or not, this is the first time they will meet in a winner-take-all postseason game with everything on the line. Of course, 2021 marks the first time (somehow) that the two NL West rivals have ever met in the postseason, period.

But hardcore baseball fans can tell you that Thursday is not the first time these teams have squared off in one game that decided the fates of their entire seasons. Here is a look back at the previous two times the Dodgers and Giants staged a win-or-go-home matchup in regular season tiebreakers, along with some close calls when they almost played win-or-go-home games on the season’s final day.

Those were the words radio broadcaster Russ Hodges yelled into his microphone over and over again as Bobby Thomson’s walk-off home run for the Giants landed in the left-field seats at the Polo Grounds, resulting in one of the most famous broadcast moments in baseball history. Indeed, the sport’s annals don’t have a more dramatic moment than Thomson’s blast off Dodgers pitcher Ralph Branca in a moment that linked the two players together for the rest of their lives.

The drama of the Giants’ pennant-clinching victory over their New York City rivals in the decisive Game 3 of just the second pennant tiebreaker series in NL history was heightened even further by what the Giants accomplished just to get to that point. They trailed the Dodgers by as many as 13 games in mid-August, prompting the Associated Press to write:

“The Dodgers can start scouting the American League contenders. Unless the Brooks fold completely in their next 50 games, they’re in.”

Well, the Giants won 37 of their last 44 games while the Dodgers played just above .500 ball, a miracle collision of mathematics just to force the tiebreaker set. In fact, each team had to win its final two scheduled games to stay deadlocked. The Giants took Game 1 of the tiebreaker series on homers by Thomson and Monte Irvin. Brooklyn stayed alive with a 10-0 rout in Game 2. That brought the whole city to a standstill for Game 3 as millions watched on television (this series featured baseball’s first live coast-to-coast telecasts) and millions more listened on radio.

The Dodgers carried a 3-1 lead into the bottom of the ninth before the Giants rallied. Alvin Dark led off with a single against ace Don Newcombe, and Don Mueller advanced Dark to third on a single that should have been stopped with better defensive positioning. Whitey Lockman drove in Dark with a double and Dodgers manager Chuck Dressen pulled Newcombe off the mound for the right-hander Branca. With sensational rookie Willie Mays on deck, Branca pitched to Thomson and served up the “Shot Heard ‘Round the World” — one of baseball’s most famous home runs.

The locations were new after both the Dodgers and Giants moved to the West Coast before the 1958 season, but the tension remained the same.

The difference from ’51 is that, much like we saw in 2021, these teams stayed neck-and-neck with each other all season long; they alternated possession of the NL lead five times in June alone. Los Angeles opened up a 5 1/2-game cushion in early August and still led by four with two weeks remaining before it lost 10 of its last 13 contests. The Dodgers lost their final scheduled game against the Cardinals, while Mays hit an eighth-inning, go-ahead homer in the Giants’ finale against Houston to force another three-game pennant tiebreaker with the rivals holding identical 101-61 records.

The Dodgers won a coin flip to determine home-field advantage and chose to hold the opener at Candlestick Park, followed by the final two games at brand-new Dodger Stadium. The Giants chased Sandy Koufax in the second inning and claimed Game 1, 8-0. In Game 2, Ron Fairly hit a sacrifice fly to bring home Maury Wills — playing in his 164th of an incredible 165 regular-season games that year, a record that may never be topped — as the walk-off run.

The Dodgers once again found themselves, just as they were exactly 11 years before, three outs away from a pennant when they carried a 4-2 lead into the top of the ninth. But everything unraveled from there: San Francisco loaded the bases with a single and a pair of walks, Mays singled home a run, Orlando Cepeda tied it with a sac fly and Dodgers pitcher Stan Williams later walked in the go-ahead run with the bases loaded. Second baseman Larry Burright then committed an error that brought home Mays as the insurance run, and Billy Pierce came in and pitched a perfect bottom of the ninth for his only save of the year.

The Giants snatched victory over the Dodgers from the jaws of defeat once again in a winner-take-all Game 3. They lost to the Yankees in the World Series, just as they did in 1951.

2004: Dodgers finish 2 games ahead of Giants in NL West standings
The Dodgers held a three-game lead entering the season’s final weekend, but the second-place team, the Giants, happened to be in town for one last three-game series. San Francisco took the opener to keep hope alive, but Steve Finley — fresh in L.A. from a trade that would net him just 58 games in a Dodger uniform — etched his name into this rivalry’s lore with a walk-off grand slam in Game 2 to seal the division title.

1997: Giants finish 2 games ahead of Dodgers in NL West standings
Manager Dusty Baker led a worst-to-first renaissance in San Francisco, and the Giants swept the Dodgers in a memorable two-game series on Sept. 17-18 to pull even with their rivals. Brian Johnson walked off the second contest with a 12th-inning homer still revered by the Bay, spurring the Giants to their first division title in eight years.

1971: Giants finish 1 game ahead of Dodgers in NL West standings
The Giants opened September with a comfortable eight-game lead over the Dodgers before Los Angeles went 18-9 (and beat San Francisco five straight times) to close the gap. It all came down to the final day of the season, where the Dodgers took care of business with a 2-1 win over the Astros but the Giants responded by beating the Padres — meaning fans just missed out on a third tiebreaker series between these rivals.

1966: Dodgers finish 1 1/2 games ahead of Giants in NL standings
This one featured some scoreboard-watching drama in the days before the internet. The Giants took care of business in their final-day matchup against the Pirates, but they needed the Dodgers to lose both games of their doubleheader against the Phillies to pull within a half-game and necessitate the Giants flying out to Cincinnati to play a make-up game against the Reds.

Los Angeles lost Game 1 and San Francisco players sat at the airport as Game 2 began, not knowing whether they would be flying home or to Cincy. But the Dodgers happened to have a guy named Koufax on the mound for the finale, and he outdueled Jim Bunning in a complete-game victory to seal the pennant.

1965: Dodgers finish 2 games ahead of Giants in NL standings
The Giants rolled off a 14-game win streak in early September, but then the Dodgers responded with a 13-game win streak of their own. The rivals were tied as late as Sept. 27 with six games left to play before Los Angeles inched ahead at the end. Don Drysdale and Koufax won each of their last eight combined decisions of the season, setting up the Dodgers for their World Series triumph over the Twins.

1959: Dodgers finish 4 games ahead of Giants in NL standings
The Giants held a two-game lead for the pennant before the Dodgers swept them in a doubleheader on Sept. 19 to pull even. San Francisco then lost five of its last six games, while the Dodgers won four of their last six and then prevailed in a three-game tiebreaker against the Braves to take the pennant.

1924: Giants finish 1 1/2 games ahead of Dodgers in NL standings
The bothersome presence of the Dodgers (known that year as the Brooklyn Robins) led to some controversy for the powerhouse Giants. New York led Brooklyn by just 1 1/2 games entering its final series against the Phillies, and Giants outfielder Jimmy O’Connell offered Phillies shortstop Heinie Sand $500 to help throw the last two contests. Sand declined and O’Connell would receive a lifetime suspension for the bribe, but the Giants split the series anyway to capture their fourth straight pennant (still an NL record).